I wrote this on Tuesday and meant to publish it on Wednesday but instead here it is on Thursday. Tomorrow is 2016. Here I am.

I’m staying on top of a mountain with my parents and my girlfriend and it’s winter up here and my stomach hurts all the time but what else is new. I’ll be giving up sugar and dairy and caffeine and alcohol in 2016 to try to make the pain go away. We’ll see.

On Monday I spent the morning skiing with my dad and I was pretty okay at it, which was a surprise, because in my head I am “not that good at skiing.” But I remembered how to do parallel turns and I made it down some long slopes and I even did a few blue trails which is more difficult than what I attempted in February and it felt nice. I’m not sure what makes some activities amazing and fun and what makes other activities just okay. My dad thinks skiing is amazing and fun and for him it is. I think it is okay. But I am hoping to convince everyone to go snow shoe-ing with me tomorrow, which I think is sort of just a glorified winter version of hiking, and I’m so fucking excited for that possibility I could pass out. People are different, have different likes and dislikes, etc etc. The answer to my question is obvious. It’s still a curious thing to ponder.

Anyway after I was done skiing I went into the lodge to eat a delicious kale caesar salad, which I probably wouldn’t be able to eat if I had already cut out dairy and sugar because I’m pretty sure the dressing was creamy and sweet, but I haven’t given that stuff up yet so I ate it. I sat at the bar because I was by myself and the tables were all full anyway, and a few minutes after I ordered another woman came and sat next to me.

I don’t know how we started talking but soon we were deep in conversation. She had just arrived from Alaska, she told me, and was doing a “walk about” in Oregon because she thought she might move here. She said she likes the sound of Portland, or maybe Grants Pass. I laughed when she said that because what are the odds that a woman who just landed in Oregon from Alaska would be interested in living in the exact two places I’ve lived in Oregon since I arrived here one and a half years ago?

I asked if she’d grown up in Alaska, because I tend to be a little bit in love with everyone I’ve ever met who grew up in Alaska, but she said no, she moved around every three years when she was a kid because her dad was in the military. “Mama was a rolling stone,” she said, and I loved her then, even though she didn’t grow up in Alaska.

One of the things she said early in our conversation was that she was searching for her “forever home,” and we marveled at that concept together. I told her I could never imagine anywhere being my home for forever, and she asked if I just hadn’t found the right place yet or if it was something else. “I think it’s me,” I said. She said she’s been in Alaska for the past 15 years and she loves it, but every three years she gets that itch, that wanderlust tickle, like a time bomb ticking inside her. “Maybe I was programmed that way at birth,” I told her.

She asked what I thought of Portland, of Oregon, of the mountain we’re currently on and of the kale salad I was consuming. She offered me a slice of pizza and I said no at first, to be polite, but then she offered again and I really wanted a piece so I said yes and she thanked me for accepting her offer and not saying no just to be polite (caught!). I told her I was originally from the east coast and she seemed super surprised — you don’t have that vibe at all, she said.

I was scrolling through my instagram account just now, because I didn’t go skiing today so my body isn’t tired and my brain is wired, running on anxiety and holiday season vibes and social media binging, and I was going further back and back and back and admiring all my nature photos and my selfies and my cute Portland babe images, and I thought about how if I go far enough back I will eventually hit Brooklyn. 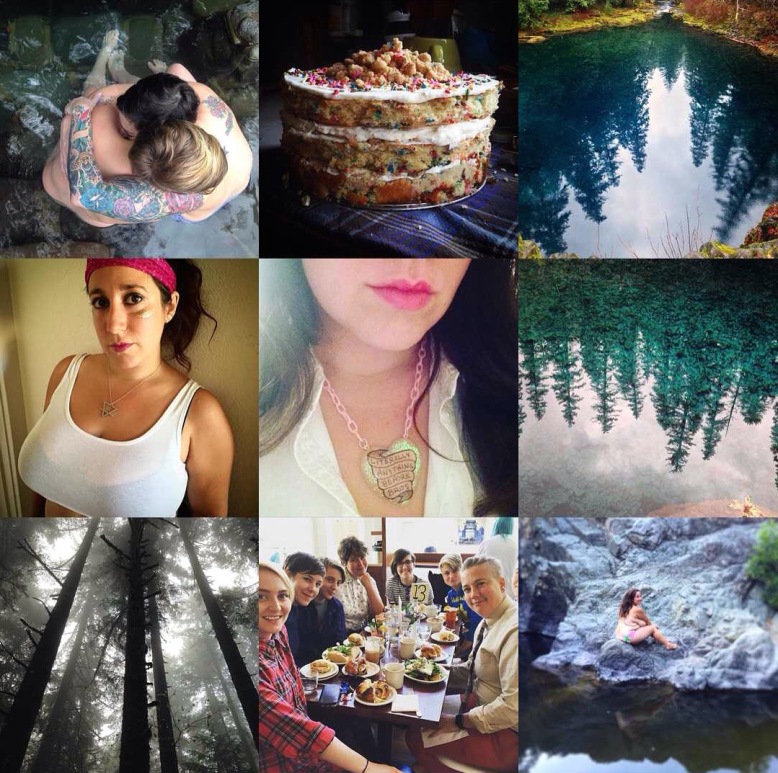 I may not give off east coast vibes anymore, but I used to live there and that’s never gonna change because that’s not how the past works. It just sort of sticks there, existing, and it maybe takes a different shape over time, or your brain smooths over rough edges and sharp turns and all that jazz, but basically it’s just there. If I scroll through the images I’ve posted on the internet over the past ten years (I made a Facebook account in 2005! I’ve had a social media presence for literally a decade! I’m only 27! Ew!) I can swim through Oregon’s waterfalls and hot springs and lakes and rivers for a while but eventually there I am in the southwest, on the world’s worst road trip with the prettiest backdrops, and then there’s Brooklyn, a year in Israel, school in Manhattan, a childhood in Newton…the east coast looms large. The old me was real too. I don’t hate her, I don’t wish she didn’t exist. I think she’s lovely.

But the present is the same as the past, in that way: it sticks here.

When I finished my lunch with the woman from Alaska I wished her well and thanked her for the slice of pizza. I told her I hoped she enjoyed her time on this mountain, and that her stays in Portland and Southern Oregon were helpful in figuring out where she wanted to go next. “I hope your journey is exactly what you want it to be,” I said.

“It will be,” she nodded. “Because I’ve already decided that whatever happens, it’s exactly what I want it to be.”