Yesterday I spent the afternoon in a coffee shop with Courtney, working on various things on my computer: a gift for Alley for our upcoming anniversary, some annoying bank-related admin tasks, and this blog. I also took on the task of cleaning up my desktop, because I have a bad habit of saving a million files there so I can “find them easily” but then I never actually ever open them again and it slows down my already slow MacBook. So anyway, I was moving documents around to get them off my desktop when I stumbled upon my Nostalgia Folder.

Everyone has a folder like this on their computer, right? Maybe it’s not called “Nostalgia Folder” but it’s pretty common to have a folder dedicated to old girlfriends, old versions of yourself, old art…right? Well I assume it is. It’s human nature to put away details from our old lives so we can examine them later, turn them over in our hands and our brains, try to make sense of who we are by looking at who we were. Maybe that’s not human nature, maybe it’s writer nature. In any case, I’ve got this nostalgia folder on my computer. And yesterday I decided to dig into it.

Depending on one’s mood, looking down memory lane can either be really fun or extremely upsetting. I’ve spent more than one occasion obsessively going through my inbox, reading old emails from humans who were at one time tremendously important to me and who I now no longer speak to for whatever reason, and I’ll tell you what, that kind of exercise can fuck you up for days. But yesterday I was feeling carefree, and the content in my Nostalgia Folder brought me joy. The thing that brought me the most joy and made me laugh out loud? The screenshots from my old OkCupid profile. Here they are:

And then I edited it shortly after, I guess, because here’s the next one: 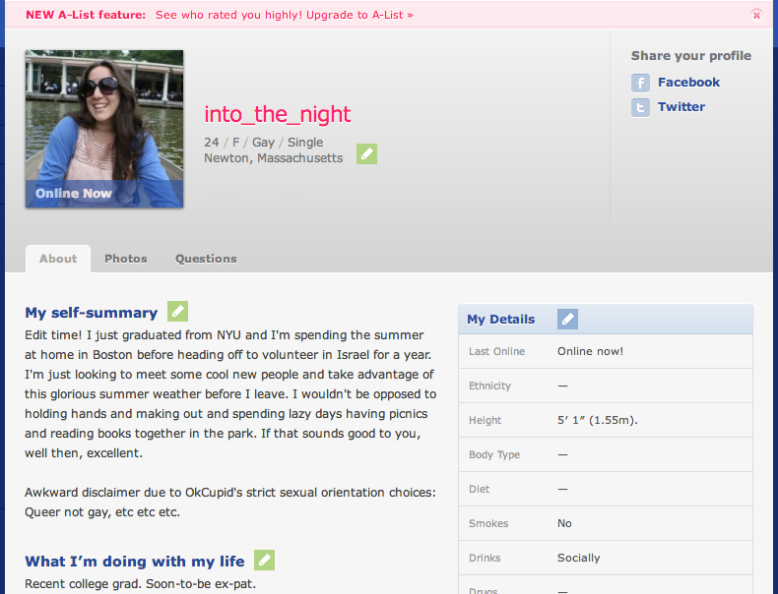 And then there’s this:

And finally, here are the dazzling photos I chose to show off my charms and good looks to potential future babely dates: 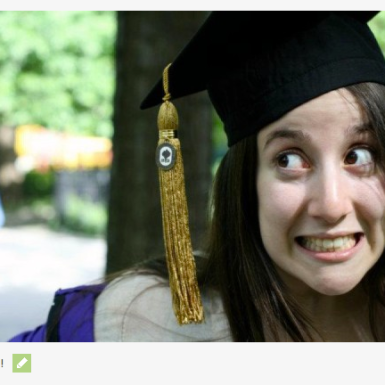 This all cracks me up for a million reasons. First of all, this profile marks the first time in my life I was really presenting myself to the world as a queer girl. I made this profile in the summer of 2010, right before I left New York to go live at home for two months before leaving for Israel for a year. I hadn’t had a serious girlfriend yet. I had barely any experience hooking up with other girls. I had basically spent the entire year leading up to making this profile (a) being in love with Emily (a person who was definitely not in love with me) and (b) coming to terms with my queerness.

By all logic I should’ve been really shy and insecure and felt weird about making a dating profile. I mean, I remember I was pretty insecure in my queer identity and did feel a little weird about making a dating profile, but look! I did it! I fucking took the OkCupid form by the horns and just fucking filled it in! Look at me (suggestively? Did I think I was being suggestive? Oy…) biting that sparkly cupcake necklace! Look at me earnestly announcing to future dates that I am “queer not gay” and also that I spend a lot of time thinking about “how to fix the world.” WHAT A LITTLE TINY BABY! (I was not 24. I was 21. I am LOLing at my old self lying about my age by 3 random years? WTF, Old Self?) I AM SO PROUD OF THIS GIRL, THIS TINY 21 YEAR OLD WHO WAS TRYING SO HARD TO GET OVER EMILY AND EMBRACE THE OVERWHELMING SCENE THAT WAS QUEER NEW YORK CITY IN 2010 AND WHO FELT SO AWKWARD AND BEHIND THE REST OF THE PACK BUT WANTED TO GO ON DATES AND FIGURE SHIT OUT SO BADLY. LOOK AT HER! LOOK AT HER GO!

Anyway, I thought it was pretty funny that I stumbled upon these screenshots yesterday, on National Coming Out Day, because it reminded me that I am in fact quite the baby when it comes to being a queer adult. In queer community we often talk about “queer time,” or the idea that the actual number of years one has been alive on this earth is sometimes less relevant when parsing their behavior than the number of years they have been out as a queer human, because of delayed milestones, replaying adolescence, etc etc. I don’t 100% subscribe to this – I think, like most things in the world, there is a healthy mixture at play and this theory is not relevant to everyone – but I do think there is something to be said to the way I feel young when I am around queers who have been out forever, who have known themselves deeply for longer, who were making out with other queers at raves while I was sitting in AP History class and crushing on random cis boys because I didn’t know I had more options in this life.

I think about my coming out the first time around, how confused I was, how elated I was, how I didn’t really give a fuck about language or labels or words, I just wanted to kiss Emily all the time. I think about London, of course, where I first met Emily, where she held my hand on Ardi’s bed that night in February and kissed me in front of all our friends. No one noticed, because they were all busy making out with each other, but I noticed everything about her: the way her teeth were stained red from wine and her lips were too, the way she raised her eyebrow and looked almost mean when she said, “I can’t believe you’ve never hooked up with a girl,” the way she held my hand for a second longer than I expected her to and then grinned before asking, “So can I kiss you?” I think I knew she would. I had never kissed a girl before. I was so into it. I was terrified.

And then I think about everything that came next. Coming home from London. Living in NYU dorms for the summer of 2009, going to my internship and my job and finding as much time as possible to pine over Emily (so basically pining over Emily all of the time, especially at said internship and said job). One night we all went to her apartment and I got too drunk on red wine because I thought maybe if we were all drinking red wine again it would be like the beginning except it wasn’t at all and then everyone went out to a bar and I stayed at the apartment by myself and cried and fell asleep in her bed and woke up soaking wet because the window was open and it had started to rain. I remember not knowing what the fuck I was doing but feeling okay about that, because I was 20, because I was sure Emily was The One, because I was so excited and also so confused to realize I was gay, because I was living in New York! By myself! Being young! Fucking up! It all felt exciting and honest and I wouldn’t give it back, not for anything, even if it felt like The Worst at the time. I’m so grateful that I was allowed to be that version of myself. And I’m psyched, to be honest, that a relic of her still exists in these screenshots of my Very First Dating Profile that I decided to stow away in my Nostalgia Folder.

Here I am with Sam on his birthday in 2010 – of all the photos I browsed through while thinking about this post, I loved this one best. I’m drunk and I’m holding a fucking whisk and I was probably internally freaking out about not knowing what ~the future held~ but also I am happy and I’m with one of my best friends and I’m in New York and I’m gay and everything is gonna be fine and I think I knew that even then, which is magical.