The train was blessedly easy. I gather that buying a ticket works on the honor system – you don’t have to show it to anyone to board the train, and I thought the conductor would eventually come around to check, but he did not. Maybe on longer trains eventually they would? I don’t know. I kind of love not knowing things – it’s one of the only ways I know to soothe my anxiety. That sounds counter-intuitive but at home, where things feel “knowable,” I stress myself out trying to find the answers, even if they’re not really necessary. Being “somewhere else” allows me to turn that part of my brain off, just exist, just accept that I don’t know. It’s nice. 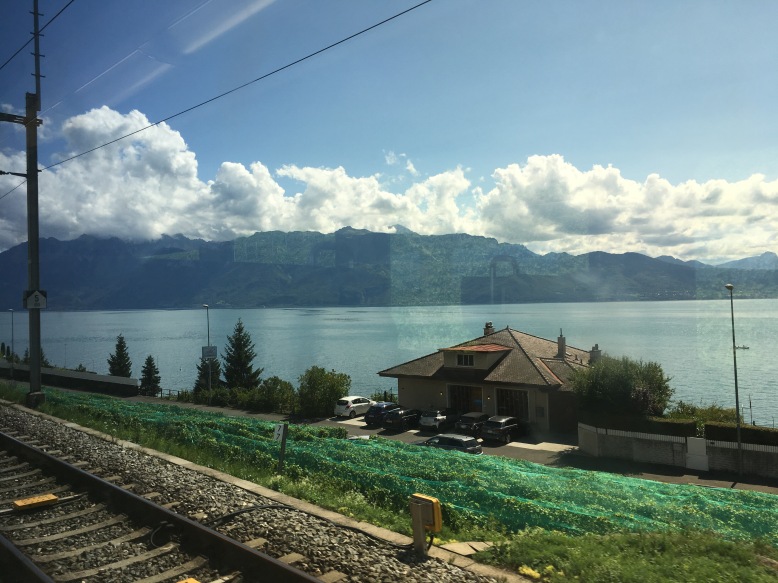 Forty five minutes and a million picturesque mountain and lake views later, I was in Montreux. I walked from the train station to my hostel along the lake and was blown away by the beauty. The vibe is such of a seaside town, even though of course we’re on the lake, not the ocean. 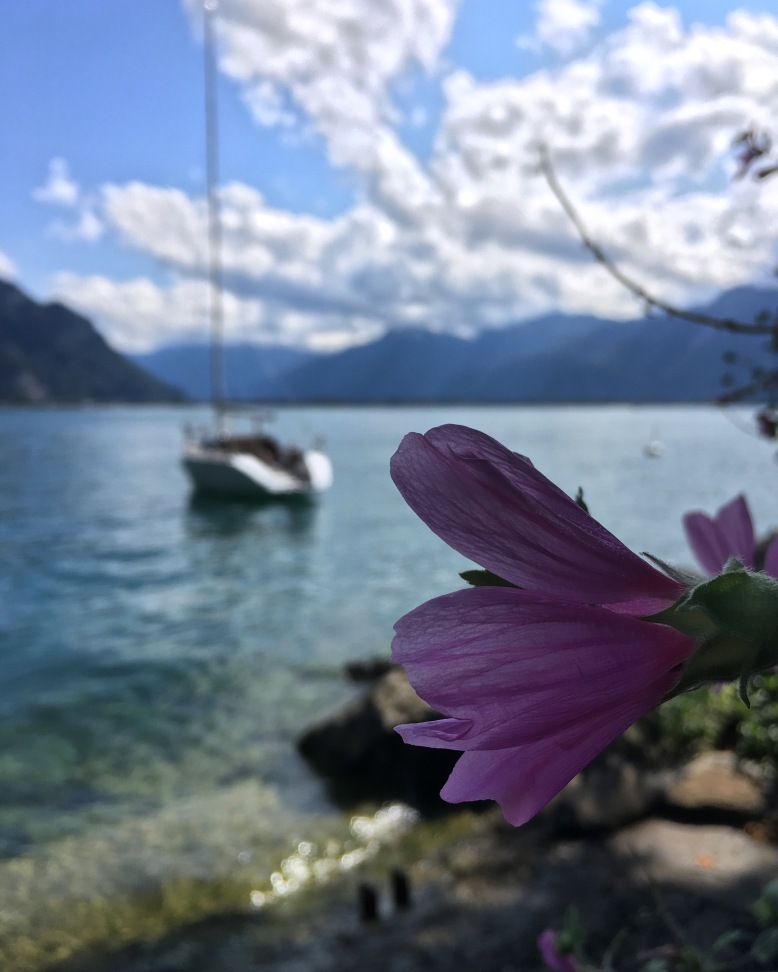 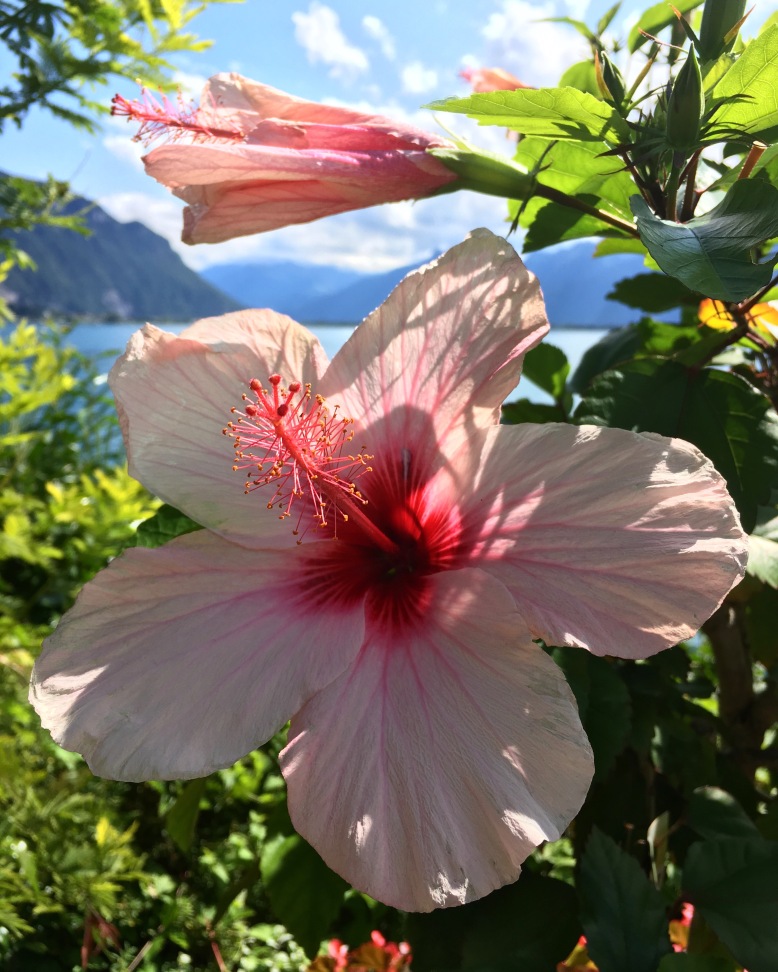 I dropped my bag in a locker at the hostel – this one only had reception and check in starting at 5pm, which is vaguely irritating but not uncommon – and headed directly to the castle! (Pro tip: If you’re planning to use a locker in a hostel or at a train station in Switzerland, make sure you have anywhere from 2-9 CHF in coins on you! Otherwise you will find yourself putting your pack back on and walking an extra 10 minutes to a little convenient store to break your 50 CHF bill by buying a Coke Light. Maybe that’s obvious to everyone else, but uh…well, that Coke Light was refreshing after that extra walking!) 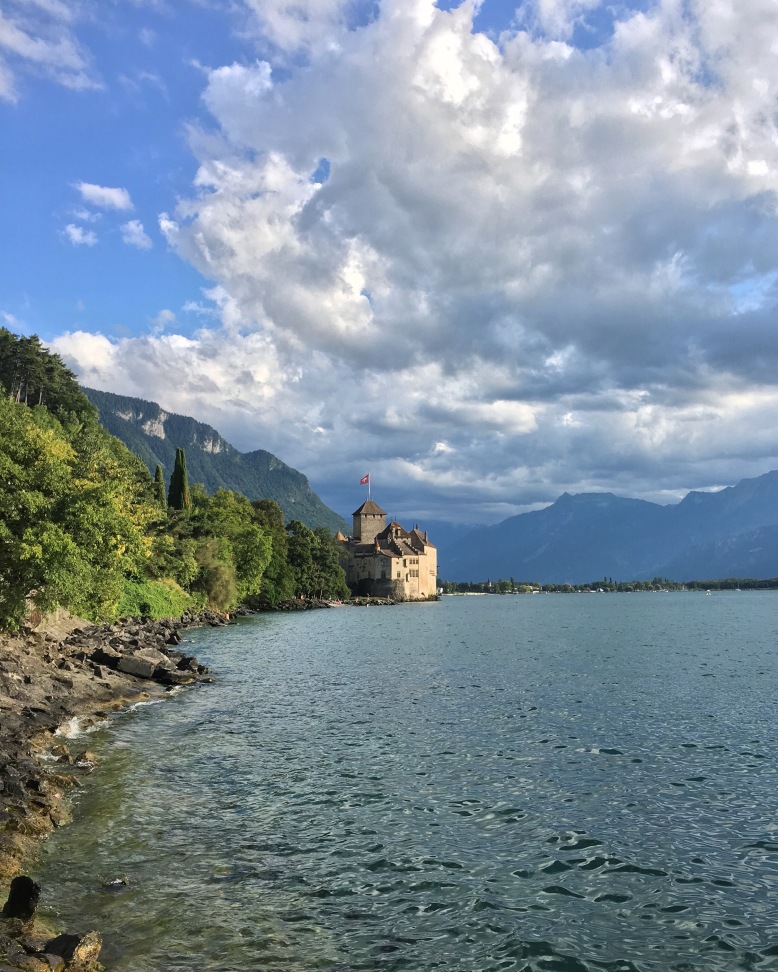 The castle is a big part of the reason I chose to visit Montreaux. I wanted to visit a “typical” lakeside Swiss town, something less urban than Geneva, but couldn’t decide which one would be best. Then I stumbled upon my friend Allison’s amazing travel blog, Eternal Arrival (thanks, Facebook algorithms, for being useful for one thing in your life), and she had just written a post about off the beaten path scenic spots in Switzerland! Montreux and the castle were on her list, and just like that, my choice was made. I love when life works like that. (By digital forces of questionable morality influencing our every decision? Ugh, but yeah, I guess.)

I was disappointed about the harsh 5pm sunlight – it didn’t lend itself so well to photos. But I got over myself and had an excellent two hours at the castle. I know that castles and the ideas behind them – classism, wealth inequality, etc – are actually not good, obviously, but I couldn’t help being impressed with the architecture and the historical value of the building. 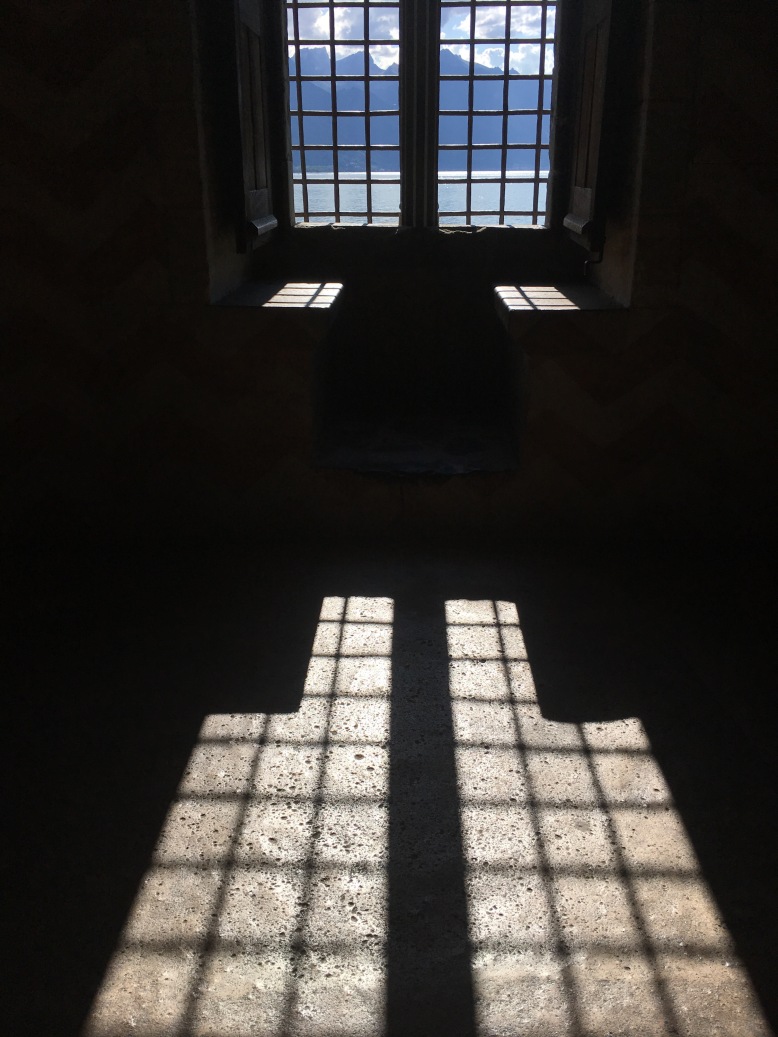 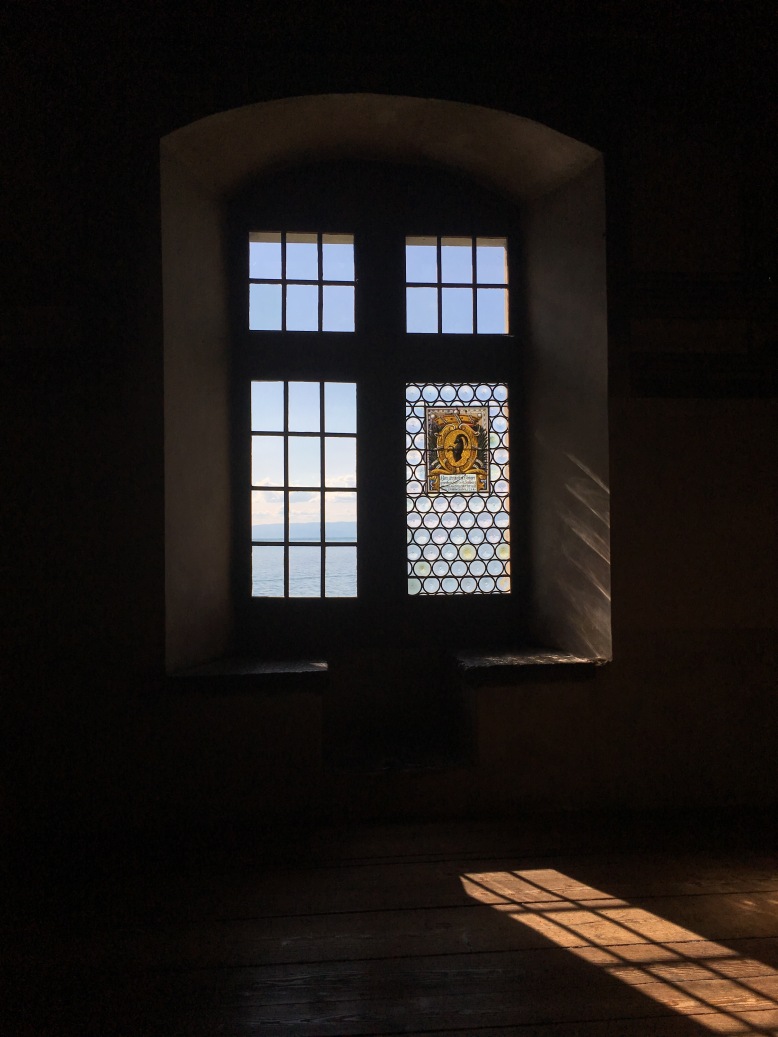 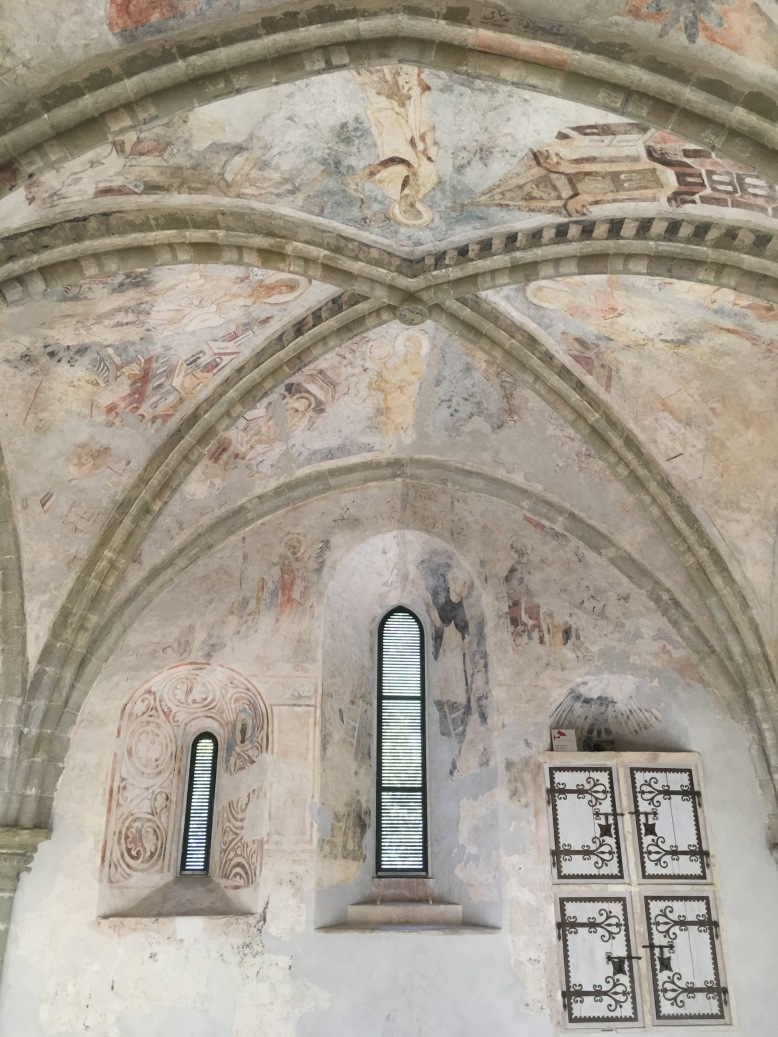 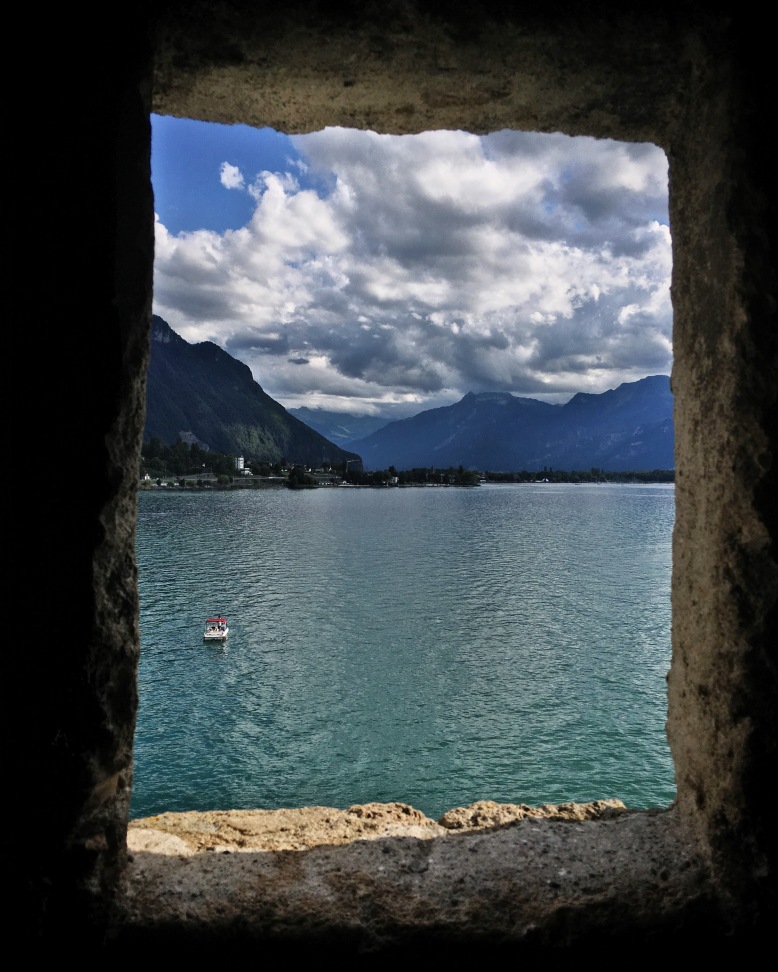 When I was done at the castle I walked back to the hostel and checked in. I got a bottom bunk this time, which I was super thankful for, especially as I’ll be in Montreux for two nights. I used the free wifi at the hostel and texted with some friends from home and learned that Frida has always wanted to visit Montreux and especially wanted to see the Freddie Mercury statue here! The woman at the front desk of the hostel – Christine, who I adored – had just pointed out the statue on my map, so I promised Frids I would go find it. I also really wanted to get to a grocery store so I could buy some not-outrageously-priced snacks and avoid eating at super-overpriced restaurants and cafes, but unfortunately 95% of the grocery shops in town had closed by 7pm and most would not be open the next day as it was Sunday and I guess these folks are good god-fearing people. I searched online and found one grocery store that was going to be open until 10pm, right near the Freddie Mercury statue. Perfect.

I decided to walk again, as opposed to taking the bus, because it really is so luxurious to have the time to go everywhere on my feet instead of worrying about schedules and appointments and deadlines. My only goal was to get to the store before it closed, and I had plenty of time.

Walking by the lake at sunset again gave me the vibe of the ocean. I saw a lot of families, a lot of beautiful art, and finally, Freddie Mercury! I excitedly texted Frida to let her know. I got a text back soon after: “I’m weeping.” Success! 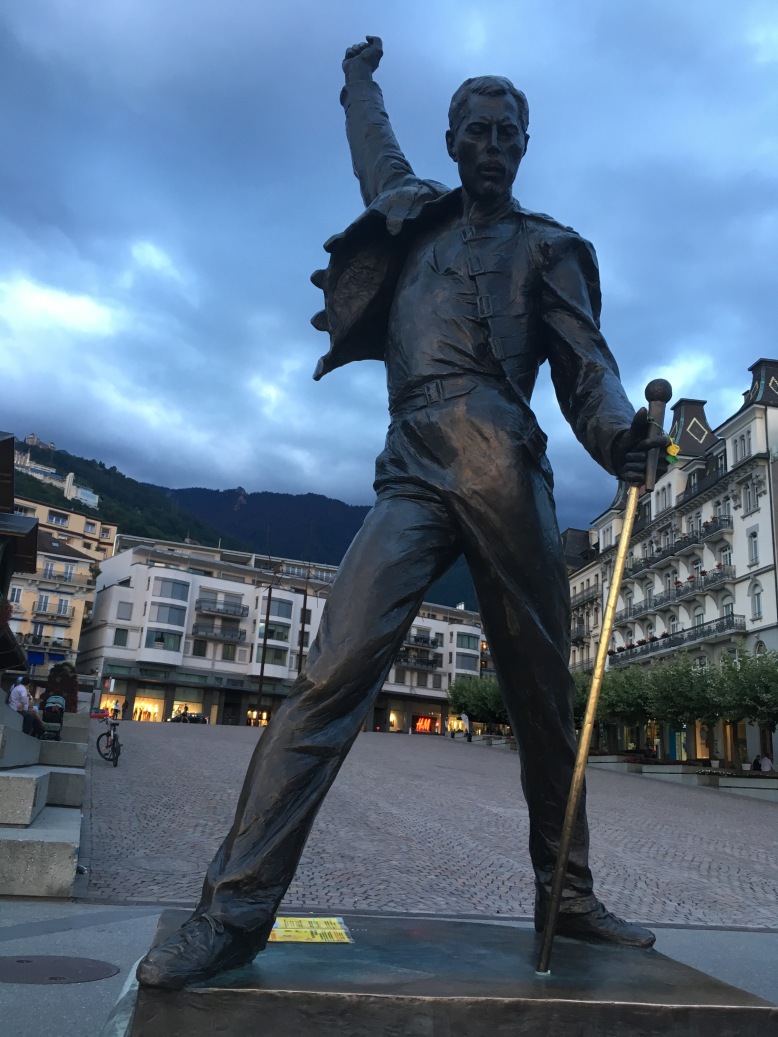 After hanging out with Freddie I made it to the grocery store which…well, it is generous of Google Maps to call it a grocery store. Gas station shop might be more accurate? Place to buy some provisions if you are in desperate need at 9pm on a Saturday night? I fell into that category, though, so I made do. I felt a bit like I was doing a resupply shop for the PCT – everything I bought was shelf stable and vaguely unappetizing but would do in a pinch: dried apples, raisins, salami, chocolate. Well, the chocolate wasn’t unappetizing – it was delicious.

I did take the bus back to the hostel, seeing as it was dark and I had big plans for the next day. I had agonized over how to best logistically plan my short time in Montreux, but ultimately decided that I would take a day trip to Gruyeres. It was far for just a day – a few hours on several trains, roundtrip – but Gruyeres is home to both a cheese factory and a chocolate factory, plus a castle, which is basically my dream scenario, so I decided it would be worth it.

And with that, armed with many screenshots of the train schedule, my inexpensive food options, and a weird numbness in my big toe (I don’t know when it started or why, but it was noticeable and bizarre), I happily fell asleep. 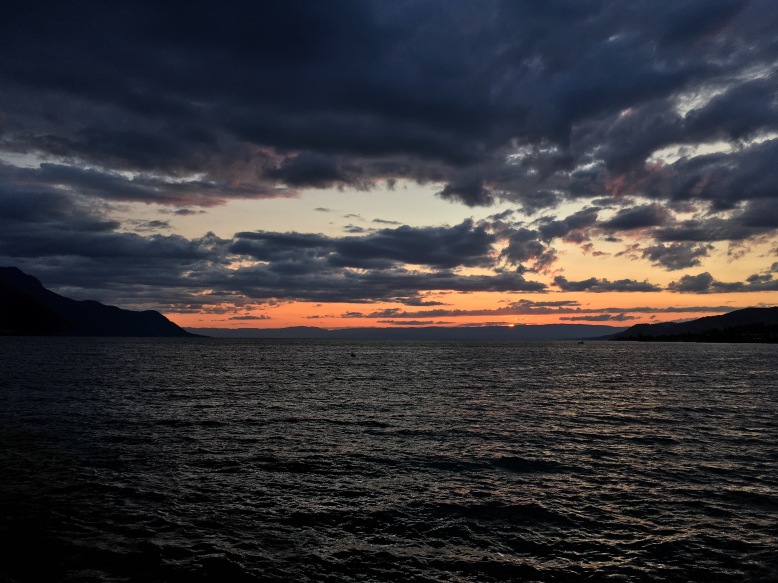